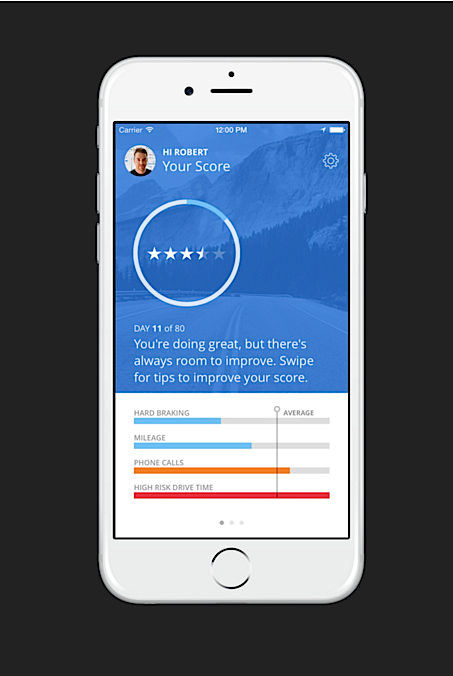 Have you ever wondered why car insurance premiums are so expensive? Insurance fundamentally works by spreading the cost of repairs and claims for drivers who are in accidents among all drivers who buy insurance from any particular company. Many careful drivers think that it is not fair to have to pay for the costs incurred by others who may be poor drivers. For years I wished that someone would come up with a way to ensure the careless drivers paid the price for their negligence in the form of higher premiums instead of spreading the cost out among those of us who do our best to drive safely.

An unintended consequence arising from the advent of the smartphone is the amplification of the difference between careful and careless drivers. Most careful drivers don’t heed the temptation to take their eyes off the road and focus on the digital universe in their smartphone.

There is no way to know for sure if the widespread adoption of smartphone use precipitated the need for a way to measure the insured individual’s driving habits, we do know that a growing trend has been one where top rated insurance companies are introducing new and different ways for their customers to prove they have good driving skills.

For now, a small group of well-known insurance companies are making it possible to measure the skills of drivers in two different ways. Progressive Auto Insurance first started its usage-based insurance program called Snapshot, in 2008. Since then the Snapshot device has been fitted to over three million vehicles. Their strategy initiated a first step into usage-based personalized auto insurance rates by using a small device that plugs into your car’s OBD-II port. The device records information from your car, including your speed and breaking harshness. This data is automatically sent to your online account, and is available to users for viewing. As other insurance companies fell behind with this huge PR boosting advance, many big name insurance companies Allstate and State Farm followed suit in introducing usage-based programs to remain competitive.

AAA Auto Insurance is in the process of rolling out it’s own pilot program this year (2016), called AAA Drive. Unlike Progressive, the method of monitoring the driver is based on an app downloaded to the customer’s phone. Currently the program is being tested only in the state of Illinois but there are plans to make it available nation-wide at some point once it has been fully tweaked and is ready.

Having features in common with snapshot, AAA’s downloadable app allows their customers to record every trip, automatically scoring them based on smooth driving, speed, mobile distraction, time of day, and fatigue. A feature that distinguishes it from Progressive’s device based method is that it measures a driver’s distraction based on frequency of phone while driving. Drivers with good scores will be able to earn discounts on their premiums.

Driver-tracking apps can provide very in-depth levels of detail, and can give information not only about driving behavior but the context associated with it. For example, they can accurately detect whether any specific person is a the driver or simply a passenger in the car.

We suspect the use of a smartphone app (as opposed to a plug-in device) will become the new norm that will eventually be adopted by all insurance companies since it is easier for customers and costs much less for the insurance company to develop. More evidence of this upcoming trend can be seen with the latest offering from a Boston based startup app developer named Censio. It is our understanding that Censio is currently working on an app based pilot program with Progressive under the assumption that they will be able to help Progressive’s customers reduce distracted driving.

We also have a feeling that the pendulum of premium discounting could swing both ways on customers and indeed it must. While the marketing spin from these companies promises savings for good drivers, it is a sure bet that drivers who are not so cautious will be receiving premium increases. From a business standpoint, how else can premium reductions for good drivers be neutralized?

For all usage-based insurance program customers it is important to rank well on your level of focus while driving, a smartphone mount should be used. This removes the risk of looking down at your phone, potentially leading to an accident or a sharp step on the brakes, which has the effect of significantly lowering your score.

Although we cannot know what kind of driver you are, we can promise to make your driving experience a safer and more productive one if you need to use your smartphone while driving. And the odds are good that one of our smartphone mounts will fit your phone. Maxx Mount boasts the ability to hold over 351 smartphone models between its standard and large smartphone mounts.

To see if your phone is compatible with one of our mounts please visit our product page to verify which size smartphone mount will work with your phone.

The Most Advanced Mobile Mount Gets Better:
Interchangeable, Individual...
Scroll to top